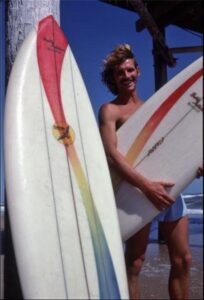 In 1995, the Buddy Pelletier Surfing Scholarship Foundation was started in memory of Buddy Pelletier. Buddy was formerly ranked as a top surfer with the APS in the 1980’s. Throughout his career, he was featured in many surfing publications, such as Surfer Magazine, U.S. Surf, and Surfing. Not only was he a surfing hero, but he was also awarded with an Act of Heroism award for saving the lives of 2 children during the Cocoa Beach Surfing Festival, where he also won the Professional Division.

Buddy retired to Puerto Rico and began a whole new adventure. A natural switch foot, he had a left break in his front yard that pumped year round. When longboards came back into fashion and a competitive circuit got under way, he decided to see if those old bones still had it. Still one of the best, he won the Puerto Rican National Longboard Championship three times and decided to continue in his surfing career.

However, circumstances changed when Buddy’s mother was diagnosed with terminal cancer. He decided to return to the States and put his career on hold while taking care of her through her final days. After she passed away, Buddy showed a renewed vigor on his board, realizing just how short life actually is. Pulling from this strength, he completed a successful pro tour. His last professional appearance was at the Ocean Pacific Longboard Invitational in Hawaii. However, another hurdle in his story was about to unfold. Shortly after returning home, he underwent surgery and cancer was discovered. Buddy wasted no time in gathering those he loved close to him. His family had long been concerned about his choice of careers, but when they saw the brotherhood and the family he had gathered over the years, their fears were replaced with a sense of deep gratitude.

At that time there was an annual surf contest in eastern North Carolina, Sweet Willy’s Pro-Am. During that event, there was a spontaneous outpouring of support from Buddy’s surfing brothers. With little or no notice, teams bid against teams, contestants against contestants, and in an afternoon over $2000.00 had been raised for Buddy to use as he wished. When he was given this money and told of how it happened, he immediately had a purpose and a plan. We spent many hours with Buddy as he meticulously planned and provided a vision for this Foundation. One aspect of the foundation that was close to his heart was the Humanitarian Aid Foundation, which was set up for other surfers who may find themselves in Buddy’s shoes with regards to health issues. To have something that Buddy could pour all his devotion into was exactly what Buddy needed in the latter part of his life. He also understood the importance of education, in any form and wanted to provide a hand up to those wishing to climb higher. And so was born the Buddy Pelletier Surfing Foundation.

Some of his final thoughts were of the Foundation and the good it could do. To wish him a final goodbye, we gave him a waterman’s service on the Outer Banks, where there had been many happy memories for him. When the surfers released his ashes into the ocean they splashed and made happy sounds to speed his journey into the next adventure.

He lit the torch, set the path, passed it to us and we’re still going strong.